Birth of Railway in Eswatini In 1879 the discovery of gold in Eswatini brought a horde of prospectors to King Mbandzeni’s kraal at Embekelweni in search of concession of every kind from His Majesty. There were requests for land and mineral rights, to which were added petitions for concessions to build railways and even run refreshment bars on them. Credit goes to Alexander McCorkindale for first pursuing the idea of a railway in Eswatini in 1865. In fact, when the railway was eventually built 99 years later , it was suggested it be named the McCorkindale Railway but this was turned down and it was given the name it bears today of Eswatini Railways.

Almost a century passed before these early dreams were to become a reality and not before the question of a railway linking South Africa to the Kosi Bay via Eswatini had been raised as a political pawn during the 1920s. This was when the suggestion was made that Eswatini be incorporated into the Union of South Africa.

At the bottom of the Ngwenya Mountain, the fledgling Eswatini Railways, which celebrated its 40th birthday in 2004, was eventually built. Plate laying began in March 1963 and on 5 November 1964, the new railway was officially opened by the Ngwenyama, King Sobhuza II. 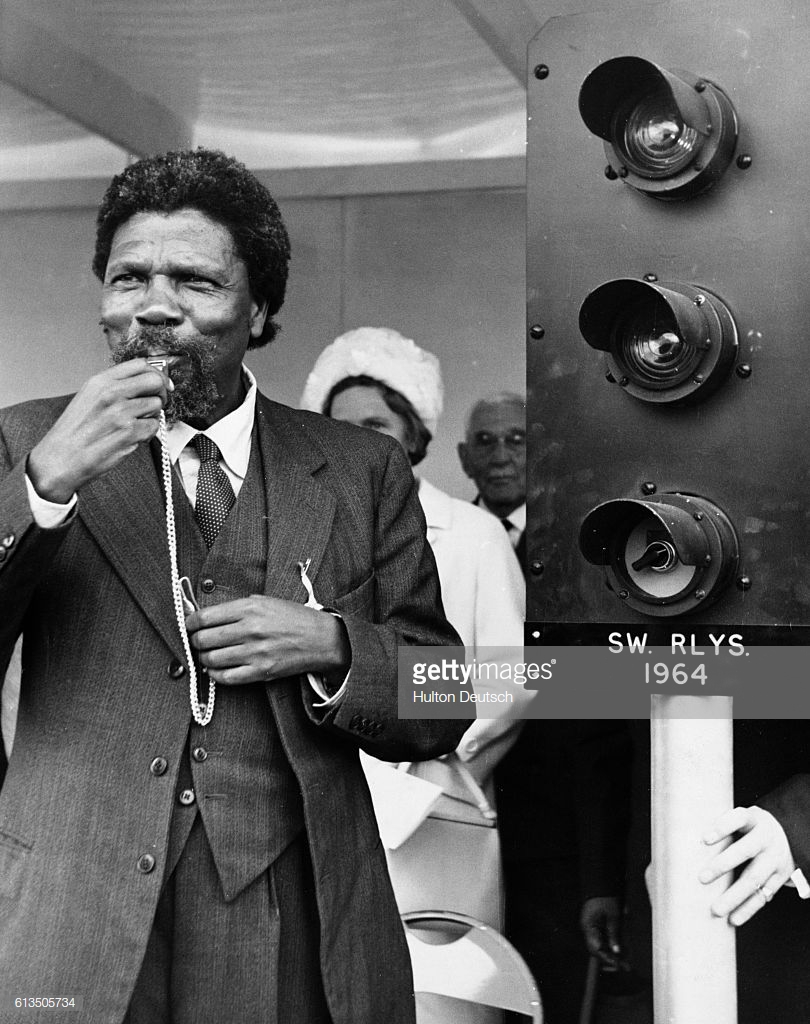 Eswatini Railways was established for the sole purpose of transporting a single commodity – iron ore.

Eswatini Railways was concessioned to Mozambican Railway- CFM from the beginning up to 1978. Following the independence of Mozambique in 1974, an exchange yard was built at Siweni, enabling Eswatini Railways to take over all its operations and steam locomotives were leased from South African Railway during the transition. During the same period, the Railway was administered by management teams seconded in turn from Rhodesia (now Zimbabwe) Railways, Canadian National Railways and South African Railways.

The transition period was marked by a decline in traffic and revenue due to problems experienced by CFM, which made Eswatini to look for alternative routes. Plans were then made to access Durban and the South African hinterland and a new 90 km line from Phuzumoya to Golela was built and commissioned on 1st. November 1978.

Following this development, it was decided to further connect the Golela/ Phuzumoya line to Komatipoort, thus providing a North-South link through Eswatini. This Northern Line as it is commonly called was commissioned on 14 February 1986 and it enables traffic from Northern countries like South Africa, Zimbabwe, Zambia and DRC to flow to and from the Ports of Richard’s Bay and Durban.

During the early 1990s, Eswatini Railways, which does not usually carry passengers, was a major player in the repatriation of Mozambican refugees who had sought asylum in Eswatini during their country’s civil war. No passengers had previously been conveyed, other than those riding the steam trains which, until recently, were utilized for pleasure excursions.

Eswatini Railways moves a wide diversity of traffic, including Eswatini’s export commodities of sugar, coal, canned fruit, wool pulp and timber, as well as imported goods such as petroleum products and general goods. The Railway also operates a state of the art Dry Port which is a satellite port for Durban Port.

The 300 km continuously welded network with concrete sleepers cover the whole network. The network extends east from Matsapha Industrial Site to Phuzumoya where it connects with Northern rail link to access the South African ports of Durban and Richards Bay. The Mananga link to the North provides access to northern countries such as Zimbabwe, Zambia, and DRC.

Eswatini Railways presently has a staff of 327 persons and moves on the average 4 million tonnes a year. About 75% of the traffic is transit traffic which makes the small railway a bridge railway. The Railway has capacity to move 80,50 and 40 wagon trains which is unique in Africa.

Didn’t find what you are looking for?

Click below to Get in Touch with Eswatini Railways

We may request cookies to be set on your device. We use cookies to let us know when you visit our websites, how you interact with us, to enrich your user experience, and to customize your relationship with our website.

Click on the different category headings to find out more. You can also change some of your preferences. Note that blocking some types of cookies may impact your experience on our websites and the services we are able to offer.

These cookies are strictly necessary to provide you with services available through our website and to use some of its features.

Because these cookies are strictly necessary to deliver the website, refusing them will have impact how our site functions. You always can block or delete cookies by changing your browser settings and force blocking all cookies on this website. But this will always prompt you to accept/refuse cookies when revisiting our site.

We fully respect if you want to refuse cookies but to avoid asking you again and again kindly allow us to store a cookie for that. You are free to opt out any time or opt in for other cookies to get a better experience. If you refuse cookies we will remove all set cookies in our domain.

We provide you with a list of stored cookies on your computer in our domain so you can check what we stored. Due to security reasons we are not able to show or modify cookies from other domains. You can check these in your browser security settings.

We also use different external services like Google Webfonts, Google Maps, and external Video providers. Since these providers may collect personal data like your IP address we allow you to block them here. Please be aware that this might heavily reduce the functionality and appearance of our site. Changes will take effect once you reload the page.